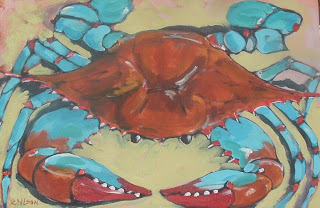 I have spent the week without Cindy around. She is away on a conference in D.C. We have vacationed there before. Our vacations are usually loaded with sightseeing. It gets pretty lonesome around here without her. Even the dog suffers withdrawal. So here I sit solitaire and sedentary.
Acrylic on canvas 16"X24".This painting is sold.

Fishing with Buck Rogers in the 20th Century 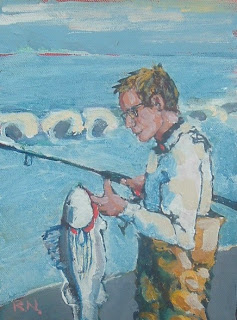 If you follow my blog then you know about my love of fishing the outer banks. Ginsoaked boy, will you testify? On a cold Sunday in January, 1988 I was fishing with Buck Rodgers for bluefish in the surf north of the Kitty Hawk Pier. We had tried a few places farther south earlier in the day with no success. The bluefish blitzes that were the stuff of legend had dwindled in the last years. I fished a lot of them with Frank, Buck’s dad. Then, we both hooked up on simultaneous casts. We both landed 8 lb. plus stripped bass. Someone came over the dune with a camera and took pictures. I saw the guy with the camera again a couple of weeks later and he gave me a photo of myself holding up my catch. This is my first attempt at a self portrait. Always the Aggie, my thumb is up. I did not realize it at the time, but I witnessed the end of the famous bluefish runs. The bluefish are still out there. Commercial fishermen are catching a lot bluefish right now just off shore. I don’t know why they don’t chase bait fish out of the water the way they used to. The stripped bass has replaced the bluefish in that part of the food chain in my chunk of the Atlantic ocean, just east of North Carolina Highway 12 (aka the beachroad). It is very difficult to bring amounts of paint to the canvas that would fit easily on the tip of a pin. Acrylic on canvas 6"X8"
On Rick Nilson painting Rick Nilson.
Posted by Rick Nilson at 10/31/2008 09:46:00 AM 2 comments:

Email ThisBlogThis!Share to TwitterShare to FacebookShare to Pinterest
Labels: why don't you just ask him? rick nilson's paintings 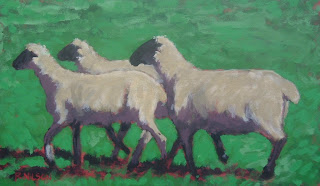 I read somewhere about how paintings are sometimes done with one brush. I have tried it and found it very frustrating. I second guess myself and think maybe I just picked the wrong brush. This time I stayed with it. Acrylic on canvas 14"X24" (SOLD)
Posted by Rick Nilson at 10/28/2008 04:18:00 PM 2 comments: 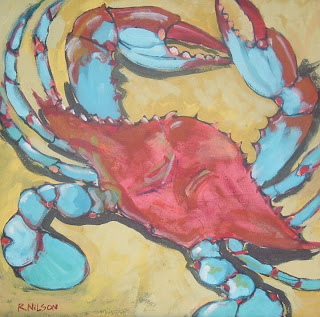 About 5:00 PM I get the urge to post. Sort of a punctuation point that defines art for the working middle class! "See the bourgeois crab with stage fright, he got caught in the spotlight".
Acrylic on canvas 18"X18".\
This painting is sold.
Posted by Rick Nilson at 10/26/2008 04:53:00 PM No comments: 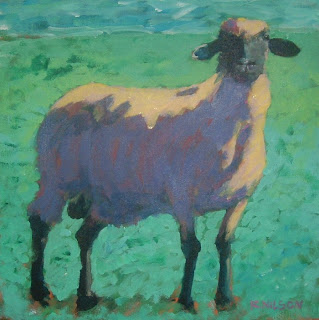 I have learned how things must be "just so" in order to stand in front of a canvas and complete a painting in a single go. Of this I can't say very much. I thank Mrs. Jorgensen for letting me into her pasture to capture these shots of this old buck on Bitter Lake. Acrylic on Canvas 18"X18"
(SOLD)
Posted by Rick Nilson at 10/23/2008 05:54:00 PM 2 comments: 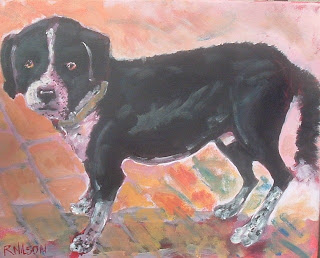 In California there are lots of dogs. This is one of them. Acrylic on canvas 16"X20" Private commission. (Not for Sale) 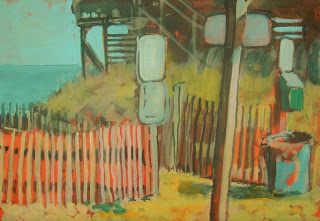 This is a preliminary sketch with washes, but I am starting to like it. I have been a little slack with producing lately. I am going to Santa Monica tomorrow. I won't be back until next week. So while you are looking at this view east to the Atlantic, I will be looking west to the Pacific from modern Roma. I had a wonderful day yesterday, and a bird crapped right on my shoulder! Does it get any better? Is there anything you can say? Acrylic on canvas 14"X20". Hold on there sailor!

Missionary Crabs (on painting the marathon) 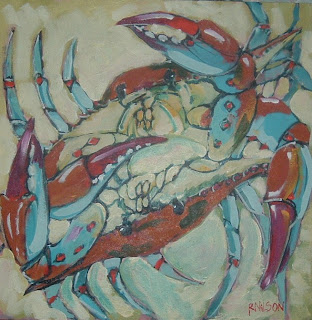 I am making up another crab scene. This seemed to be a very complicated painting. I painted on it long enough to call it "Marathon crabs". These crabs were tired of holding this position for 3 days. I heard a daily painter referring to painting daily as a marathon. He said you can't start a marathon and then quit after ten minutes and say I will finish it tomorrow. I painted this right side up and then upside down and then sideways. I struggled with this one. Acrylic on canvas 18"X18"
This painting is no longer available. 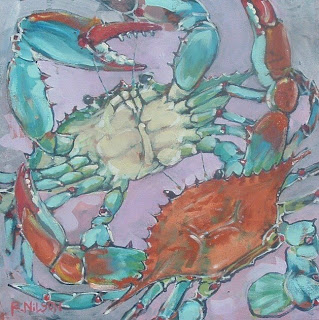 Work in progress
Sometimes I just don't get your drift!
Sometimes I have cold starts. That's when I start a painting and question if I have mixed the right.....(green) say or why did my big beautiful potato turn into a cloud................again! Or how long is all this going to last....really? Before the cold start things, there is the bit when I am trying to decide what not to paint and how not to paint it. If it doesn't bother you the ocean is running off the canvas, then I have succeeded in my goal for this work. Or maybe its just high tide. 4 photos before "Eggs and Sausage" Acrylic on canvas 16"X36"

I started painting in 2007.
send me an email
ricknilson@gmail.com

its ALL about me